I used to work at a charming little bookshop called “by the Book”.  It was right after I quit full-time ministry and before I became a teacher. I loved it. I have always been a reader. As a child I spent my money on two things. Candy and books. Books were and still are some of my best friends.

As much as I loved working at the bookstore, there was one season I loathed. Returns. Every quarter, a bookstore is allowed to pull all the books that have not sold within a certain time frame and send them back. Small bookstores need this in order to keep their shelves fresh and doors open. It really is a nice perk.

If you are the employee, however, this requires lots of boxing and schlepping and details. Three things that I don’t especially enjoy. It was like a really long tedious scavenger hunt. Searching for books that had been miscategorized or improperly shelved. My boss would hand me a 40 page list with the doomed titles circled in red and the hunt was on.

Later when I managed my own shop, I was amazed that certain employees thrived on returns. The challenge. The sense of accomplishment as they surveyed the stacks and stack of books that had been found. The list conquered.

I was not this employee. It was an exhausting chore. Sadly, I would gather all the books that would never go home with a loving fan. No one would dog ear their pages, scribble in the margins  or hand them off to a friend because, “You just have to read this.” No. These books were the unchosen. Unloved. Soon to be forgotten.

And inevitably, I would get distracted by one of the titles or the cover. It would pique my interest and I would sit down cross-legged and begin to read. 20 minutes would pass and I would think to myself, Maybe if we put this in Women, it would sell or If people could just see the cover then  someone would buy it. So I would rescue the ill-fated book, take it to the Women’s Section and give it reprieve for a few more months. Needless to say, follows directions is not one of my strengths.

It was on one of these days that I found a beautiful book that gave voice to an idea that had been brewing in my heart since my return to Maui. I can still remember the feeling of discovery as I sat on the carpet, my forehead pressed into my fists with the book open on my lap. It was called “Permission to Speak Freely”, by Anne Jackson. What blew me away was what the author called the “gift of going second”. She explains that when we are brave and share our story with someone-not just the pretty parts that can be pinned on Pinterest for the world to emulate. But when we confess the hard stuff, the dark stuff, the nitty-gritty honest struggles of the day-to-day, we give people the opportunity to open up as well. Or as the author calls it, the gift of going second.

Something in my soul started tingling. I call it the Holy Spirit hot flashes. When God puts his finger on my heart and whispers “Pay attention.” Sitting there in that bookstore years ago, I had no idea that He would be calling me to a lifetime of going first.

Sharing what the Lord is doing/has done in my life is easy for me (now). I am so amazed by his love, blown away by his grace and overwhelmed by his affection that it’s hard to keep my mouth shut. He rescued me so dramatically and thoroughly from a life of despair that it is impossible not to tell my story. It just flows freely from my lips, making it’s way into everyday conversations.

It has not always been this way. I had an incident in junior high that taught me to never be myself. To keep the real me untouchable so that no one could ever wound my soul like that again. So I learned how to blend. Vowing that I would never let someone know all of me. When I was dating and engaged, I began to let my walls down. But soon after we were married, I faced the greatest rejection I could imagine. When the person who says I do, changes their mind. But it would be years before I left. So I did what I had always done. Put on a brave face and blended into the background. Dying a slow death. Longing to be known.

It was when I moved back to Maui six years ago that I knew something in my life had to change. What I was doing was not working. In recovery they say, “We are only as sick as our secrets,” so I decided I would choose one person to reveal all of me to. My thinking was, I got myself in a mess by trying to do it on my own. I do not want to ever do that again. So this time around, whatever was going on in my life, one person would know it all.

Enter the Blond Bombshell. Gorgeous. Inside and out. I had known her before I got married. She actually threw my bridal shower. Coming out of a broken marriage, my biggest fear (besides ever being rejected like that again) was becoming bitter, hollow and angry. To me, the Blond Bombshell was everything I wanted to become. Kind. Warm. Inviting. Loving. Fun. Gracious. Charming. Generous. Thoughtful. Compassionate. Besides all that, she is a wonderful wife and incredible mom to two grown kids. But the main reason I chose her to help me navigate my way out of the darkness was because her life has not been easy. She was born with spinal bifida and has had to learn to walk four times in her life. Three times while raising children. And there is not a seed of bitterness, anger or pity in her. She has made peace with all of it before the Cross. That is why I choose her to be my secret keeper.

And I’ve told her some doozies. And she has walked me through some heart wrenching seasons. But she was also there when my heart, which had been frozen in fear, started beating again. And she was there when my dreams began to blossom. And she has been there, cheering me on, when I began to fly.

I write all of this because in my dream scenario, this blog would help others find freedom. That by going first on some hard issues, others might have the gift of going second. A lot of what I write might feel raw but the reality is I have been working on these issues for a while now. With the Blond Bombshell and the other amazing women God has brought into my life. My hope is that by being honest, vulnerable and transparent, we can get some conversations going and in the words of Goodwill Hunting, let the healing begin.

The Girl Who Lives in My Head

Here is the actual excerpt from Permission to Speak Freely by Anne Jackson. 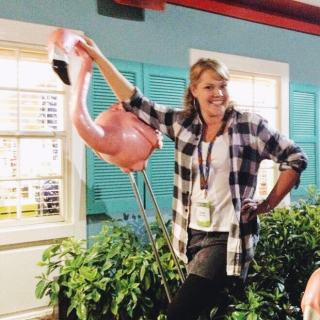 Oh hey!! My name is Leslie and I am Jesus follower adventuring through a life that went a little different than expected. I started blogging to chronicle my funny little life as a testament to God’s love and faithfulness. I'm so glad you're here.

There was an error retrieving images from Instagram. An attempt will be remade in a few minutes.